The piece, “Omen/ He Dances in the Courtyard of the Impertinent” was on display in Tjaden Gallery, Ithaca, NY from October 21 to November 1, 2013, in the group show “Explicit Protocol” 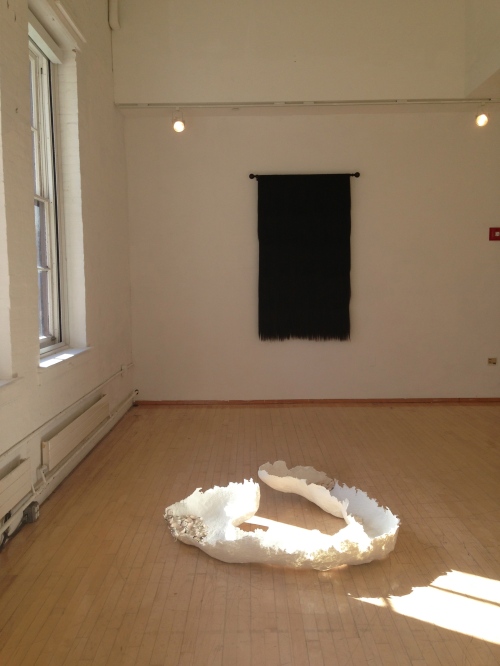 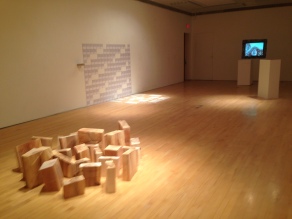 Decades ago, “justice” was already an ambiguous term when applied to the carceral system of the United States, with its overt and inherent biases of class and particularly of race.

In 1967, in a letter to his father, from solitary confinement, George Jackson had a clear concept of the what is commonly referred to today as the “school-to-prison” trajectory that makes the ghettoes of the United States the hunting grounds of the justice system:

… I thought most blacks, especially those of our economic level, understood, vaguely at least, that these places [prisons] were built with us in mind, just as were the project houses, unemployment offices, and bible schools (Jackson, 146).

Today, a prison abolition movement – comprised of individuals, like Angela Davis and organizations such as Anarchist Black Cross and New Jericho Movement, on the outside, as well as politicized individuals who remain incarcerated – is raising alarm about not only the globally incomparable rate of incarceration in the United States but also the grossly disproportionate representation of people of color, particularly African Americans, in this system.

Remarkable in its similarity to the previous abolition movement, the rhetoric, the demographics and the stakes involved cut an eerie parallel to the battle waged against chattel slavery. SUNY Cortland Professor of Philosophy, Mecke Nagel, in her essay, “Prison Intellectuals and the Struggle for Abolition,” refers to the “neo-slave narratives” of Black political prisoners. “The imprisoned writer and social critic connects the radical movement against slavery of the nineteenth century with a concerted struggle against today’s criminal injustice system.”

According to Cornell alumni and sociologist, Paget Henry, slavery and colonialism were understood, on one hand, as situations to be resisted with the aid of divine power (Lott, 59). An important aspect of the ‘critique and rejection of the racist and imperialist arguments’ used by slave owners to justify slavery, according to Henry, is “a politicizing of religious cosmologies that gave greater visibility and power to the gods of war and strength … like Shango and Ogun … Self-reflection recognized itself as angry, anguished and religious (Lott, 58).” By incorporating these elements of African spirituality into a piece that overtly addresses penalization through depersonalization and confinement, I tapped into one of the psychological weapons erected by Africans against the institution of slavery – what Henry would refer to as “religiously coded resistance (Lott 58)” – the persistence of a forbidden and empowering interpretation of ancestral rites.

In the piece “Omen/ He Dances In The Courtyard Of The Impertinent”, I have abstracted symbols widely associated with the Orisha deity of swift and balanced justice, thunder and lightning – Shango – to their formal limits, and within them submerged symbols of the failed justice system and its cumbersome weight of nameless, faceless, countless incarcerated individuals.

A standard gallery pedestal – a white rectangular prism – is, on approach, a lid-less cuboid with an accessible interior – stark and quivering red; flesh-and-blood –like red; lightning and fire-heat red. An homage to Lord Shango for the initiated, the wooden box is now a vessel of an ancient god’s will – the cooling white of reason gifted to him from Obatala enclosing the red of his virility and retributive powers. As in two of my previous pieces, “Angola-Misnomer” and “A Possibility,” the choice to incorporate symbols from traditional African religion, is a nod to the survival of elements of culture, which are in themselves symbols of endurance, resilience, resistance and continuity.  Artists like Betye Saar, have tapped into similar symbolism using “the integration of spiritually encoded practice, ancestry, and memory (Jones, Loc 2305)” in the work she refers to as her “ancestral boxes” (such as “Ten Mojo Secrets” and “Gris-Gris Box”).

At the bottom of the depth of the cuboid, trapped out of reach, is an old scale – the same luminous, raw red as the walls that separate it from the standard flow of everyday objects. The scale could be interpreted as the scale of justice, or more subtly linked to one of the most revered deities of a religion that survived violent and relentless attempts at eradication. It is tipped out of balance by the combined weight of a prison-issue, prison-orange, body-less uniform and shackles.

One side of the scale is empty and raised in an anticipatory gesture – the expectation of the restoration of equilibrium.