The building that housed Lenox Lounge for over 70 years.

Gentrification is a sticky subject for many African-Americans. I once heard it summed up as such:

“White people? You don’t come to join us. You come to displace us.”

African-Americans became a part of the originally Dutch neighborhood of Harlem in 1905. A murder within a house on West 133rd Street turned it into a challenging property to rent. The solution decided upon by the owner was to turn to a Black realtor, who rented out the apartments to ‘respectable’ African-Americans at $5 more than any white tenants were willing to pay. By 1914, in spite of organized resistance to their presence, the African-American population continued to grow, flooding in as they fled lynching in the South, and migrated from the Caribbean and Africa. The Black population brought their culture and organizations to Harlem. It was “the poorest and most overcrowded of the city’s ethnic ghettos” yet it is the birthplace of the Harlem Renaissance and has a proud legacy of arts and activism that has continued ever since.[1]

The changing face of Harlem is noticeable to anyone with eyes. It is a regular topic of discussion amidst the backdrop of omnipresent construction, skyrocketing rent prices, and the gutting of iconic establishments that are swiftly replaced with businesses that reflect the tastes of the shifting demographic. One of the most painful losses to long-time Harlem residents is the community’s treasured Lenox Lounge. The iconic jazz bar was founded in 1939 and remained open for over 70 years, hosting musical legends throughout the decades, including Billie Holiday and Miles Davis. In December 2012, Lenox Lounge was closed for good when the owner of the building doubled the rent forcing out the lounge’s proprietor. That 288 Lenox Ave (Malcolm X Blvd) is still recognizable for what it once was only adds salt to the wound. An outline of the empty space where letters once spelled “Lenox Lounge” is distinct above the papered-over storefront and the padlocked front doors.

Renowned Harlem-based sculptor Michael Kelly Williams has turned his latest commission into an 8ft tall homage to Lenox Lounge. Bolted into the median on Malcolm X Blvd just north of 124th Street, it is in plain view of the vacated property.

“This is my tribute to the Lenox Lounge – the lounge itself and also the amazing musicians who played there… Unfortunately, the Lenox Lounge doesn’t exist anymore but this is a statement. I want people to pause and think,

We lost something really special.”

A liturgy is an elaborate public form of ritual or worship. In Liturgy for Lenox Lounge, Michael has channeled his passion for music to create a piece that he describes as simultaneously possessing an ancient quality and a modern, whimsical feel. The musicality of the piece is evident in its undulating forms and pop of bright colors in unexpected materials. The tower of four domes encrusted with colorful beads and waving, feather-like fringes is, on closer inspection, entirely made of indestructible, modern materials – steel and plastic. The ‘domes’ are in fact metal baskets stacked one on top of the other, open faces interlocking, and laced through with plasticized wires that are woven in age-old techniques. CDs, old 45s, shiny bottle caps, and plastic lids all combine to give the impression of extravagant beading. The fluttering ‘feathers’ are thoughtfully applied nylon cable-ties. Some playfulness is evident in the selection of materials, including the reflectors that pick up the headlights from the bustling traffic. Every element of this sculpture is rich with music, keys and chords, patterns and rhythms, and references to cherished customs such as weaving, quilting and collage.

“The Lenox Lounge is gone but our music continues.”

My talk with Michael Kelly Williams took place at Serett Metalworks in Brooklyn when he was putting the final touches on Liturgy for Lenox Lounge. A power outage on the train tracks meant that what should have been a straightforward ride morphed into a half-day trek for me. Upon my arrival, my rattled nerves were calmed by the green slice of river that separates the metalworks compound from neighboring buildings. I opened the door to the massive, active workshop and was greeted warmly by the smiling, bespectacled artist. He showed me around the space, introducing me to a phenomenal young artist who was hard at work one floor above him, and then he began to talk about his work-in-progress. As our chat was winding down, Michael’s gloved hands began to move swiftly over the piece once again, weaving long wires in and out of the metal frame. I recorded his voice along with the commotion of the active site and photographed his delight as he labored. I felt truly privileged to witness this piece coming into being.

Michael has created art with a variety of media throughout his lengthy career. He attributes his use of found objects to his Detroit roots and especially to his father[2].

“There’s a tradition in Detroit of using found objects. My father did some work in sculpture with found objects. People are still working there with these discarded materials and creating really innovative work. So I feel I’m part of a tradition there as well.”

It would be difficult to classify such a broad range of work, but if we must use an ‘ism,’ Michael feels that surrealism comes closest to characterizing his work and surrealism encompasses the spiritual. Spirituality permeates his practice. Although he does not privilege any one tradition of spirituality above others, Michael treasures a mysterious object that he inherited from his father. According to him it looks like a milk jar covered with shells and a red substance that resembles putty. This object, which his father kept in his studio always close at hand, had a “presence about it,” Michael said. Without his father ever explicitly stating so, Michael drew links between the adorned jar and the tradition of nkisi. Today he keeps this object safely tucked away in his cabinet, taking it out from time to time.

In spite of his extensive work in printmaking, he sees himself primarily as a sculptor. As a youngster he carved, worked in clay, and created many drawings in India ink until, upon the prompting of his father, he began to work on woodcuts.

“I began to carve and print these forms that I was drawing. Because I’m a sculptor and like relief forms, I was naturally drawn later to viscosity etchings, where you deeply bite the plate, creating a relief. These plates are very sculptural.”

I first met Michael when I discovered one of his paintings at the opening of an exhibition in Harlem. Interestingly enough, the piece was made on paper.

“As a printmaker I fell in love with paper. I like working on different kinds of paper. I do paint but don’t particularly care for painting on canvas. There are my prints but there are also works on paper in mixed media.”

Asked if there was any work that stood out above the rest for him, without hesitation, Michael pointed to the film, Daughters of the Dust. He describes this opportunity – working alongside visual artist Kerry Marshall to bring Julie Dash’s vision to reality – as an honor and a humbling experience. He is filled with emotion at the memory.

Michael recognizes the value of exchange in the creation of art. To come as far as he has means that he has been nourished not only by his insatiability for music, books, poetry and visual art but also by the guidance and support he has received from mentors. He is filled with respect, gratitude and love for individuals, such as Dr. Cledie Taylor, scholar of African Art; printmaker Krishna Reddy, one of the creators of the viscosity technique; William T. Williams, a painter with an incredible “sense and feeling about sculpture”; Bob Blackburn; and Betty Blayton Taylor, co-founder of the Studio Museum of Harlem. He credits poet Amiri Baraka and sculptors John Rhoden, John T. Scott, and Robert Weil for being supportive. He admires artists such as Terry Atkins, David Hammons, Alison Saar, Kukuli Velarde, and Chakaia Booker.

In addition to his formal role as an educator, Michael has mentored many young artists.

“Wherever I am, I find out who the creative people are and I try to share and help as much as I can. I do have younger artists that I encourage. That’s important.” 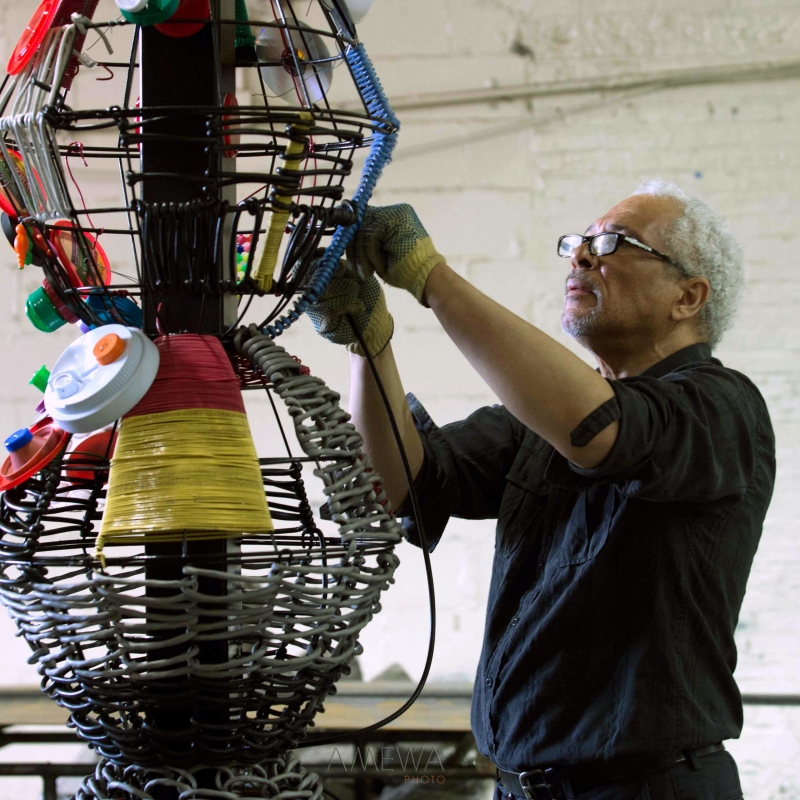 Michael has recently retired from teaching and is looking forward to his extra time as a welcome opportunity to produce more art.

“I’m influenced from so many different sources. At this point in my life everything has percolated. I’m just working…People keep asking me…if I’m going to travel. I’m interested in seeing more of the world, sure, but it’s extremely important for me to do the work now. Now is my time.”

[2] Kelly Williams, Michael’s father, was also an artist. He went to France on the G.I. Bill shortly after World War II. In France, which at that time was the center of the art world, the Georgia native studied art with Fernand Léger. Four of his children, including Michael, were born in France.