“Clay is the finest Negro athlete I have ever known, the man who will mean more to his people than any other athlete before him.”

It has been stated time and time again that Muhammad Ali is the most famous person in the world, the most recognizable man in or out of sport. The journey that transformed a young Black boy from the impoverished section of segregation-era Louisville, into a beloved and enduring global figure is the material of legend. Glory, defiance, ostracism, adoration – Muhammad Ali knew them all before he turned 30 years old. Ali’s peak as a boxer, which coincided with his heyday as a symbol of unapologetic pride and celebration of Blackness, and fearless opposition to oppression, happened well before I was born. Yet, so profoundly had he shaped an era with his life and actions, so thoroughly had he captivated the collective imagination of a people, that his presence was as sharp in my life as though I had lived through each day of the fiery magic that was Ali. In June 2016, I embarked on the trip that I had to make, along with thousands of others, to honor The Greatest of All Time as he rode on to his final resting place. 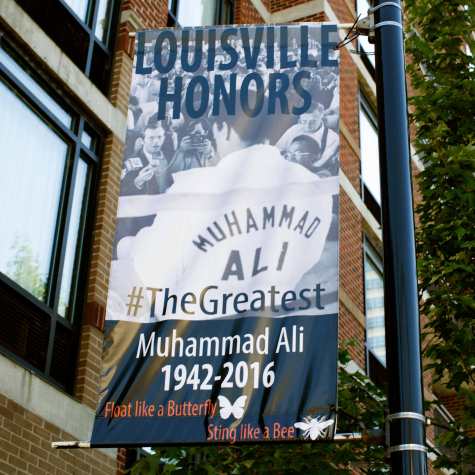 Blisteringly hot and quiet Louisville, Kentucky provided a disorienting contrast to the hectic grit of New York City. Ali’s hometown had not skimped on affirming the immensity of their hero. Banners fluttered from the top of every lamppost downtown, encouraging visitors to make use of the hashtag, #TheGreatest. Each bus stop was rendered relevant with fresh, Muhammad Ali panels. A full color rendering of a handsome, young Ali was juxtaposed with a later, black-and-white portrait of the icon. Buses themselves rolled by, flashing the message “Ali – The Greatest!” in red, LCD pixels.

Upon collection of my press badge I was informed that I had already missed the private memorial for family and close friends and that my coverage of the memorial service the following day was contingent on surrendering my photography gear to the Secret Service within a couple of hours. There were no further details so I made my way over to the Muhammad Ali Childhood Home Museum before my deadline.

At 3302 Grand Avenue, visitors and international media swarmed the light pink residence-cum-museum and its more somber, neighboring administrative branch. Temporarily redecorated with store-bought and handmade tributes, the porches and lawns of these properties served as receptacles for the steady outpouring of love and appreciation for the late boxing legend. The Democratic Republic of Congo (Zaire) was represented with a bouquet of flowers and a sign bearing the unforgettable phrase, “Ali Boma Ye.” 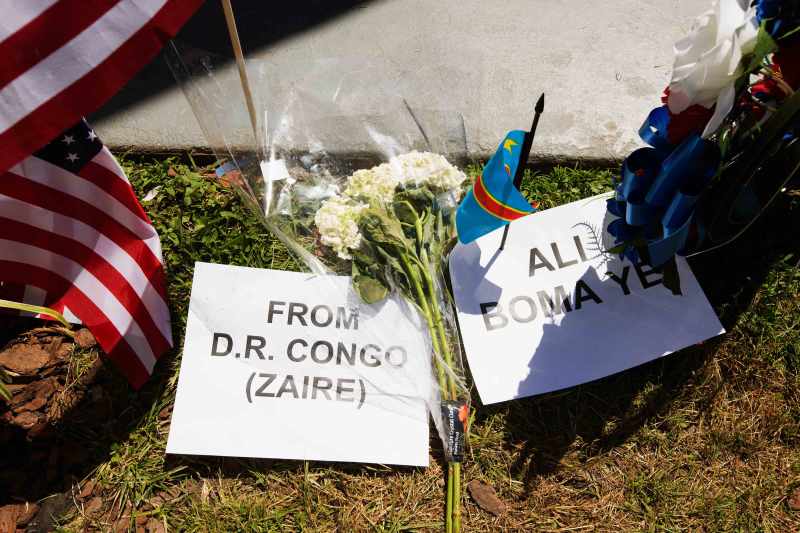 Residents of Grand Avenue congregated on the shady parts of their lawns, chatting, peddling cold water and keepsakes, and above all, bearing witness. Journalists, some undoubtedly attached to the row of conspicuous broadcasting vans opposite the property, paced the site in knowing anticipation.

A variety of characters offered me unique Muhammad Ali stories. An army veteran and Minister from Buford Georgia, James E. Lewis Jr., dressed impeccably in ivory from his fedora to his pointed shoes, put it plainly, “Muhammad Ali is my hero.” He whipped out his cell phone to show me his Ali encounter – that time when the star obligingly posed for a picture with youth from his NGO. Minister Lewis said that he carried Ali in his heart, always, from the days of The Heavyweight Champ’s stance against the Vietnam War draft, a stance that he himself wished he could have made.

“When he refused, I felt something greater than pride: I felt as though my honor as a black boy had been defended, my honor as a human being. He was the grand knight, after all, the dragon-slayer. And I felt myself, little inner-city boy that I was, his apprentice to the grand imagination, the grand daring. The day that Ali refused the draft, I cried in my room. I cried for him and for myself, for my future and his, for all our black possibilities.”

Two women of Ali’s generation became my companions for the museum tour. Gleeful exclamations and anecdotes erupted each time an antique appliance or piece of furniture stirred a memory. As the tour neared its end, they made space for me in one of the church pews that served as theatre seating at the back of the museum. They both saw and spoke to The Greatest many times and one proudly shared that indeed, she knew Muhammad Ali, as they had been classmates.

“Ali was a beautiful warrior and he was reflecting a new posture for a black man. I don’t like boxing, but he was a thing apart. His grace was almost appalling.”

Boxers distinguished themselves amongst the visitors, pausing every now and then to strike their trademark battle stance, and regaling enthused audiences with their individual tales of admiration for The Champion. Each person who had been moved sufficiently to journey to one of the assorted Muhammad Ali landmarks in Louisville had been touched at an almost visceral level by The Champ’s life.

Early the following morning, I waited in line at the media entrance to the massive K.F.C. Yum Center. I was neatly attired in a black blazer and trousers a kente scarf at my neckline. The popular African fabric was an indication that I stood knowingly and proudly within the African Diaspora, while alongside all of those who identified and supported Ali’s stance against injustice.

The bomb squad, firefighters, uniformed and plainclothes police and armed forces, mounted patrol, K-9 patrol and event security far outnumbered the media. We were soon arranged into two lines – those members of media who were from ‘The Big 6’ and those who were not. ‘The Big 6’ passed through the scanners and moved along to air-conditioned, dog- and horse-free comfort, not to mention seats, right away. The rest of us, we were informed, would have to wait another hour or two before permission to enter would be granted. My blazer was already damp and my kente scarf felt like a wet rope around my neck. I remained conflicted about my duty to be inside of the Yum Center for the star-studded memorial, and my need – as a person alive in this moment – to be out on the street. Masses of people, many of whom had traveled much further than I, all of whom were braving the merciless heat, had lined the streets to say a final farewell to The Greatest. After conferring with security and my conscience, I decided to witness this aspect of Ali’s homegoing, as surely as I would record the formalities later on that day.

Armed only with my iPhone, I left the massive auditorium where my gear had been stashed the evening before, and ran in what I hoped was the right direction. Jacket tucked into an elbow and kente scarf by now raggedly dragging behind a shoulder, I kept a steady jog towards the Muhammad Ali Center where the procession was scheduled to pause. The bare streets alerted me to my erroneous location and the shortened time that I had to prevent my mission ending in futility. Pointless questioning of fellow out-of-towners, and a brief chat with a technician at the one broadcasting truck in the vicinity confirmed the obvious. I selected a new destination – the highway exit point for the funeral cortège – and began jogging again.

Although sweat poured from my skin and my mouth was as dry as sand, I did not feel fatigue, but rather a heightening of my purpose. I finally turned a corner to find the throngs of fans and well-wishers I had been expecting all along. Rows of fans rippled towards this vibrating human wall in slow, steady waves. I ran. I squeezed through unimpressed spectators who had had the foresight to get there much earlier than I did, hoping to arrive at a fruitful vantage point. No sooner did I emerge on the street-facing side of this fence of bodies, than I saw what appeared to be a flash of red, white and black on the opposite side of the street. Could my eyes have deceived me or did I actually see, appearing for a brief moment, the flag of Trinidad and Tobago? Try as I might I could not spot it again.

I had all but given up the hope of finding a fellow countryman in Louisville, since not a single local I had spoken to, from hotel concierge to waiter, said they had ever met or known anyone from Trinidad and Tobago. In fact, the Uber driver who transported me to Ali’s childhood home a day earlier had treated me like a curio, parading me before friendly and inquisitive neighbors:

“This lady is from Trinidad and Tobago.”

“Trinidad and Tobago, the islands.”

The world had converged upon this quiet town in an overwhelming instant.

I decided to put a little distance between the patrolling cops and myself before dashing over to the other side of the street. I shouted “Trini! Trini!”in the general direction of what might have been my nation’s flag. A fellow Trini emerged from the crowd holding two identifying flags. Carol St. John was proud of her connections to the Ali family. She had worked and lived in Muhammad Ali’s home, babysitting his daughters, Hana and Laila, during the eighties; and introducing The Champ to our local cuisine. She refused to miss this opportunity to pay her final respects, and she participated as a VIP guest at each of the functions. Ms. St. John obliged me with a few quick photographs and an interview before the flashing lights of the outliers announced that the procession had arrived.

There was a surge forward as everyone sought optimal positions, as much for their cell phones and cameras as for themselves. Then the chanting began, “Ali! Ali! Ali!” It hummed across the crowd, getting louder and louder. Just behind me, a man folded over in an ecstatic shout of “Thank you Jesus! Thank! You! Jee! Zus!” and others echoed the praise. “Muhammad Ali, baby!” a spectator cried out, as the official cars began to slowly roll by. Through the curtains of the lightly tinted hearse window, I could see Ali’s casket covered in what appeared to be an intricately decorated shroud. My heart stretched towards the mortal remains of The Champ as though the combination of pride, love and loss activated in that moment would snap it right out of my chest. This was The Champ’s final, triumphant ride through the streets of his hometown. My silent thank you and goodbye was offered up amongst the chorus of voices.

Other vehicles drew my attention as familiar faces slid in and out of view – the pumping fist of Muhammad Ali Jr.; Will Smith and Lenox Lewis waving to fans on my side of the street; I just barely discerned Mike Tyson’s tattooed face on the far side of a vehicle. I recognized an ex-wife and several daughters and caught glimpses of many faces that I could not recognize. Ali’s casket, his survivors and his closest friends rode through at least ninety minutes of this passionate and emotional guard of honor – flowers strewn across their path, rippling flags and banners, exuberant cheering and chanting resounding around them.

I abandoned the crowd after the last car had passed and began the dash back to my officially assigned station. I ran through air that was as hot and prohibitive as down swaddling under noonday sun. My arms and legs felt as if they were moving in slow motion and my head was heated to a distressing lightness. But inside of me, the sweetest rain was falling endlessly. I honored, and will remember Muhammad Ali.