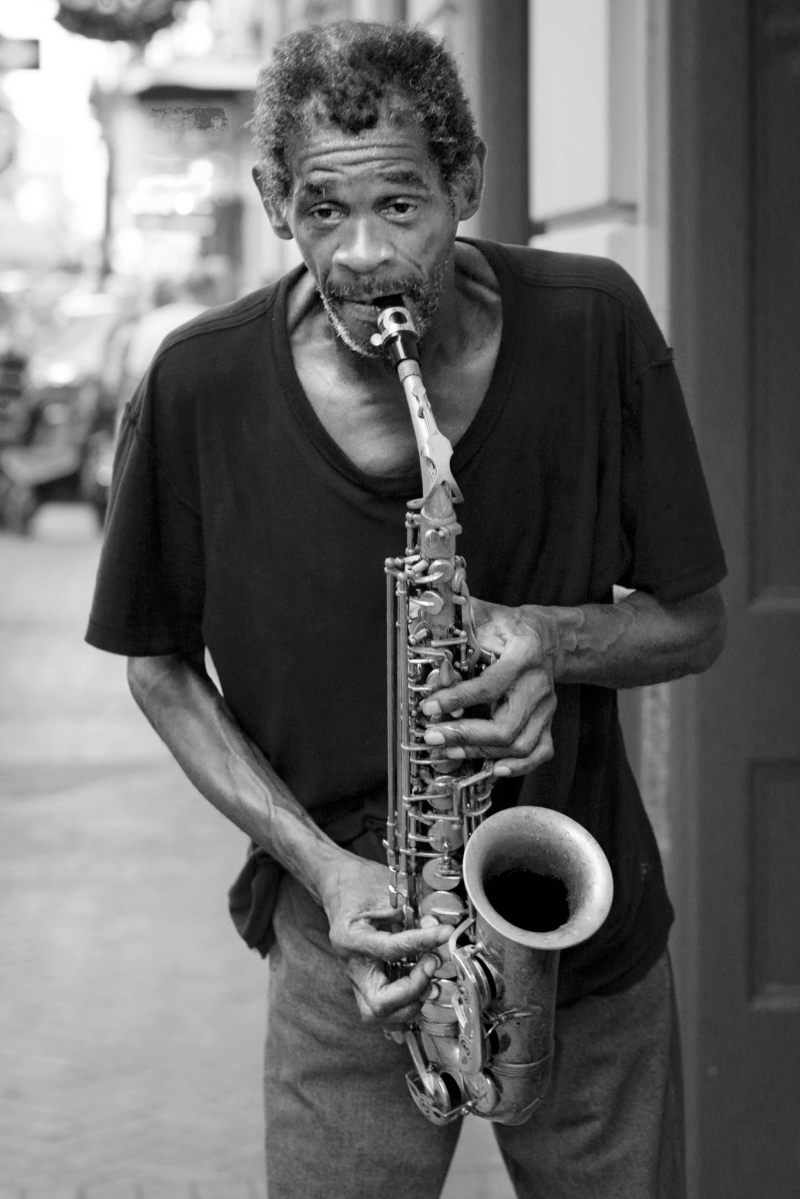 A video of the cold, violent execution of a prone Black man by white police officers opened my very first day in Louisiana. In transit I may have imagined the famed streets of New Orleans – the fertile land that has nourished Jazz and Rhythm-and-Blues; superb cuisine that just might be reminiscent of my own well-seasoned Caribbean fare; and a renowned debauchery that marks the place as vibrant and outrageous. Alton Sterling’s murder at the hands of NOPD served as a reminder of a far heavier reality. 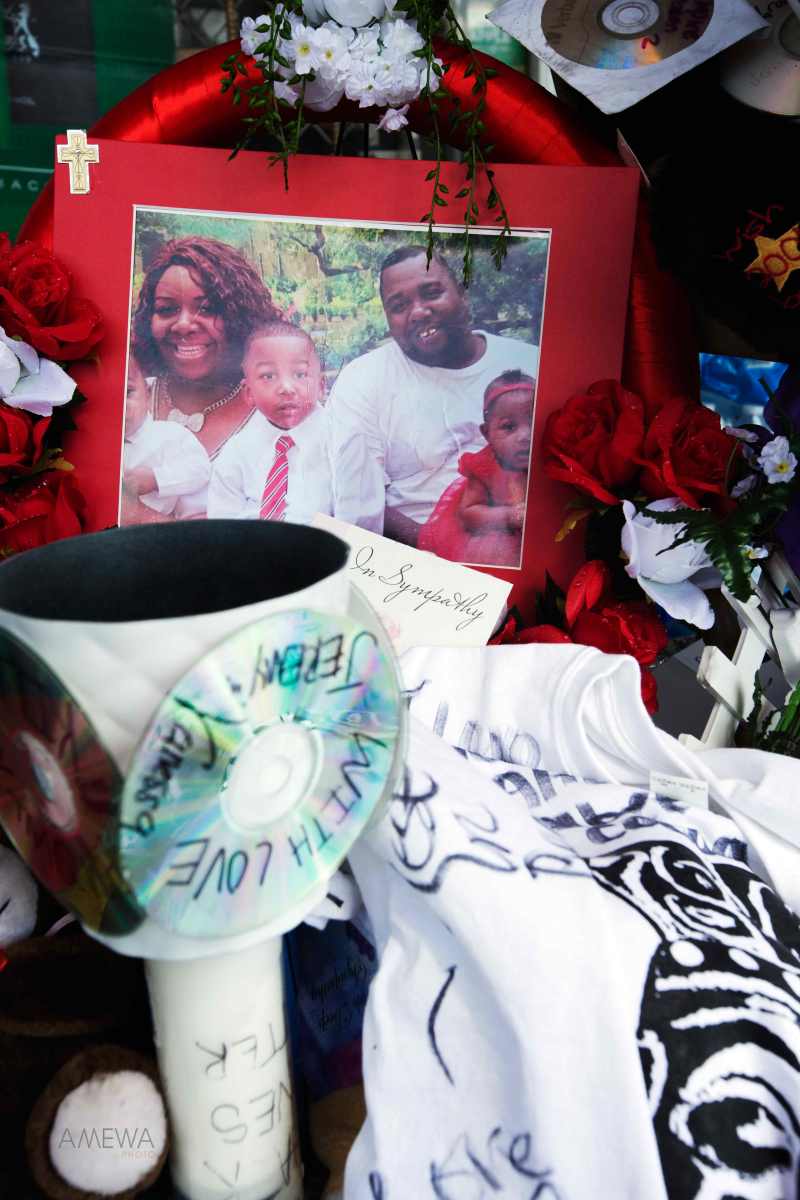 Even as I absorbed the shock of Sterling’s recorded murder, I was forced to consider who would feel the consequences of his death and who would not. Patterns indicated that more than likely the victim, now a corpse, would miraculously shoulder the blame for his own killing. I should brace myself for the character assassination that was sure to follow, for every mistake that Sterling ever made to be publicly paraded as tepid justification for his trial, judgment and execution in a parking lot. Never mind his connection to his family, his children and his community. In other words, the fullness of his humanity, his very right to breathe and exist in this world, would suddenly become a point of negotiation, so that the perpetrator of the crime could hold onto what he had just stolen from so many others.

Protester at the entrance to the Triple S Convenience Store in Baton Rouge where Alton Sterling was gunned down by police on July 5th, 2016.

And one can scrupulously proclaim, and mean it, that race does not affect one’s calculus of desert, of how resources should be shared, while appealing to ancient racial understandings that shape just who is seen as meriting a particular sort of treatment.[1]

I was on my way to the Triple S Convenience store in Baton Rouge, to document the scene of Alton Sterling’s murder, when I received the news of the mindless murder of Philando Castile. So unwilling was I to accept that in such a short space of time another Black man had died violently and pointlessly at the hands of a pre-conditioned police officer, that initially, I did not realize that the slaying of Philando Castile was, in fact, another crime that I was forced to witness in all of its cruel, graphic detail. It took an entire article, the viewing of a completely different video – once again of the end of a man’s life – before I snapped into cognizance. I suffered from a temporary paralysis of analysis, some might say, but I simply could not see what was right before my eyes because it was an unbearable reality.

“It’s not right. It’s not right what they doing to these kids today. And we need to stand together as Black people.”

Artist Jo Hines Jr. engages with members of the community in front of the mural he created in honor of Alton Sterling

Alton Sterling was a man who supported himself and his family via the informal economy – the means that many resort to when opportunities are limited. The protestors, who came out to the Triple S where Sterling once sold his CDs and where he would ultimately face an untimely death, were a thin but determined group in the middle of the day. They sat in the sliver of shade that the awning of the Triple S provided, holding placards that questioned the nation’s justice system. Some community members paced the pavement at the edge of the parking lot, drumming up support from passing motorists in a cacophony of honking horns and slowing traffic. They raised their heads and their fists and held steadfastly to their posters. I noted, on the brink of emotional exhaustion, that some signs had been repurposed from previous marches against police brutality.

There is perhaps a safety in numbers. Mass protests feel massive. There is more of a sense of empowerment and forcefulness as hundreds or thousands of footsteps fall in unison, with as many voices to roar out slogans. But to enter a protest space with a few dozen people, ranging in age from those perhaps too young to fully grasp the situation, and those too old to do more than sit in the shade holding a placard, is to enter a space of increased vulnerability. There is enough space and time to register the pain etched into each face in its individual depth. Each person that stands in a small group stands alone. There is no way to get lost in a crowd that is not there. Each protester at the site of Alton Sterling’s murder stood boldly on the frontline of the American race war that has racked up centuries of casualties. 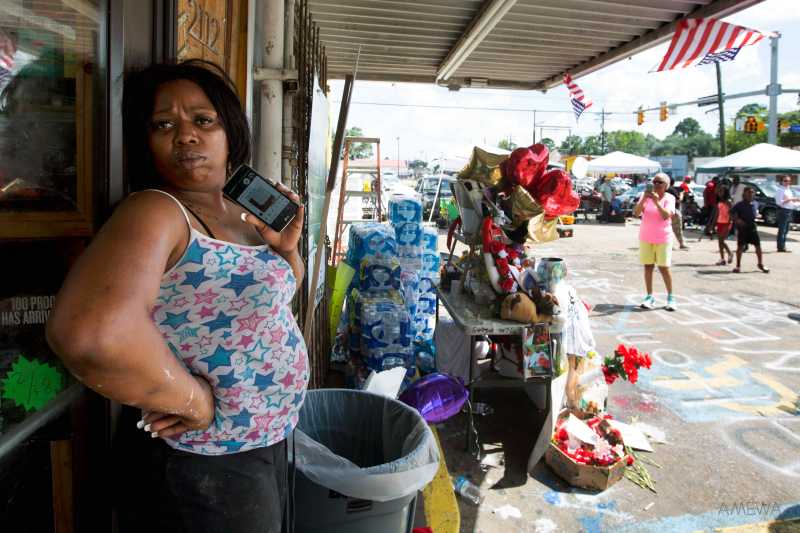 Members of the media, their trucks and tents flanking the scene, stepped through the shifting line of protestors and around the collection of photos, CDs, balloons, flowers and candles that serve as a towering shrine to Alton Sterling, murdered father of five.

Although black folk make up 31.5 percent of Louisiana’s population, their offspring account for 69 percent of the children in poverty. [3]