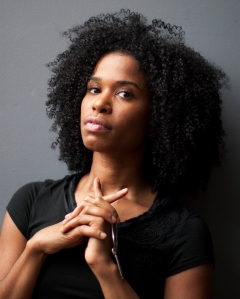 Through my art, I trace the tumultuous struggles for power and self-actualization that have existed since historic encounters imposed the definition of race onto humanity, and with it, the racialization of morality, beauty and endemic worth. I use photography and multi-media installation to decode the connections between our present reality and the past that has shaped it.

My first solo show, Exposure, was held at the National Museum of Trinidad and Tobago, (2007), followed by Between the Lines, at Tobago Hilton, (2007). My work has been published in daily newspapers, magazines and advertising campaigns, and I have been a guest photographer and judge in a television series. In 2009, I was selected as an official photographer for the Fifth Summit of the Americas, which led to an image on the front page of the New York Times.

I was awarded a Sport and Culture Grant by the Ministry of Sport and Youth Affairs (2009) and moved from the Caribbean to New York to expand my practice. I am currently pursuing an MFA at Cornell University. My work has been exhibited in the group shows, Of Bodies and Other Things, International Center of Photography, NY (2010), and Forever Forged. Forever Becoming, AACDD, London (2011), Roots & Wings, UK, Barbados, Martinique (2012); Shaking Paper, Tjaden Gallery, NY; Free School, Gary Snyder Project Space, NY (2013); and Explicit Protocol, Tjaden Gallery, NY (2013); and in the solo shows Black Power’s Inheritance, an Artist Talk at Alice Yard, Port-of-Spain (2012); and strange (& bitter) crop, Experimental Gallery, NY (2013). My work has also entered the permanent collection of the Studio Museum of Harlem, through the Harlem Postcard Series, NY (2011). My work has been published in Shift (2010), ARC Magazine(2011) and Anomalous Documents (2013).