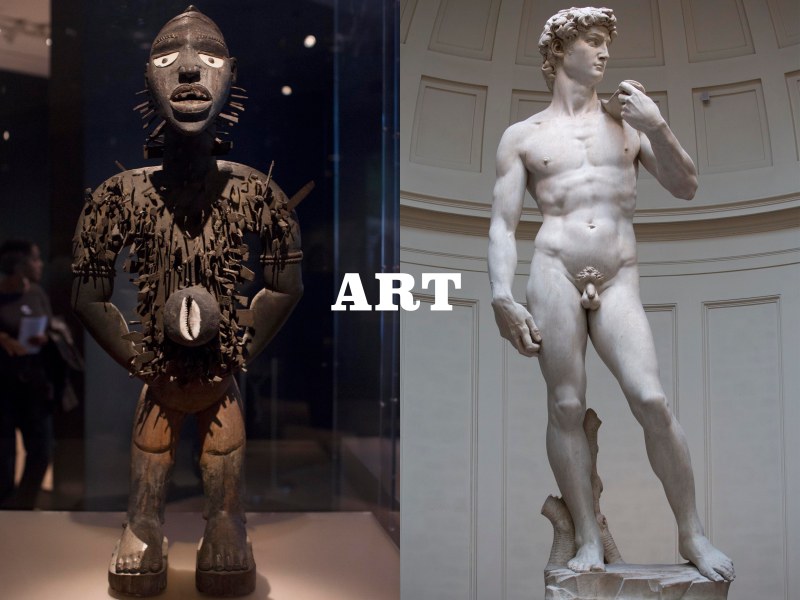 An indigenous elder is confronted with a young, European explorer on a mission to find a powerful, legendary plant (yakruna) in the Amazon forest. Probing questions from the visitor plummet the elder into grief. By nightfall he is weeping for the failure of his memory. He knows that he has arrived at the most tragic state in which a human being can exist. He is without time, without the knowledge and stories of his people. He is a chullachaqui, an empty copy of himself.

The film, Embrace of the Serpent, is a visual and ideational masterpiece. The filmmaker’s decision to adopt the viewpoint of the indigenous inhabitants of the Amazon should not be, but is revolutionary. Viewers are made to follow the familiar tale of European encroachment into this territory, but this time we are given the gift of an alternative perspective. In Embrace of the Serpent, we hear the voice of the lion rather than that of the hunter.

Shortly after viewing Embrace of the Serpent I attended the Met’s Artists on Artworks gallery tour featuring Hank Willis Thomas. On our tour of the Arts of Africa, Oceania and the Americas and Egyptian Art sections, Willis Thomas also attempted to insert the voice of the ‘hunted’ rather than the ‘hunter,’ into a space created by and for the ‘hunter’. His discourse consisted primarily of provocative questions that encouraged the reconsideration of long established but inherently biased curatorial practices.

Interestingly enough, this art-talk and the film were engagements with a single narrative that was conveyed through separate channels of visual media. The violence of colonialism, usually understood in terms of records of genocide and enslavement, continues today in the fight for ownership of knowledge. The ill-begotten right to define, interpret, classify and showcase all of the cultures of the world perpetuates the decimation triggered by the first, bloody encounters of colonialism.

The psychological damage to a susceptible public that looks to well-established institutions for information and culture is incalculable. Why would a gallery such as Arts of Africa, Oceania and the Americas even exist, lumping roughly two thirds of humanity into a single ‘type’? What vast separations of time, geography, linguistics and more are completely ignored, undercutting the philosophical, spiritual and intellectual wealth found in these differing worldviews? Those whose fallacious notions of superiority are blindly reinforced, and those whose marginalization is deepened, walk the same revered halls.

Willis Thomas attested to the psychological impact of viewing African art through a Eurocentric lens when he was a child. He would visit gallery after gallery of European treasures. There would be paintings contained in gilded frames – landscapes and portraits that matched his perception of reality and grandeur and therefore met his expectation of artistic expertise. These were impressive. Afterwards he would have the uncomfortable experience of visiting galleries ascribed to his own ancestral lineage. There would be figures rendered in proportions that did not seem realistic and therefore not particularly skillfully crafted. He joked that he would be left with the sinking sensation that “my people just couldn’t quite get it right.” In later years, after taking a class on African Art, he would come to appreciate that what was depicted was not merely a copy of the visible, but more of its essence – its fundamental characteristics, depictions of stature and moral authority and even movement through time. He was as struck by the fantastic complexity of this approach to art as were the leaders of the (European) era of Modernism, whose wholesale “borrowing” from the art of these cultures led to radical new movements in western art.

As the elder’s memories begin to return to him in Embrace of the Serpent, the audience is invited to delve into such notions as his perception of freedom of knowledge; of respect for the environment as an entity that demands prohibitions (rules); of his own fundamental need to perpetuate the wisdom of his people. Simultaneously viewers witness the disasters that ensued at the hands of missionary invaders, greedy rubber barons, and even the supposedly apolitical scientists. The cinematography, almost entirely in black and white, was seductively beautiful. The dialogue, laced with a typically unheard perspective, was refreshing. A photograph, the prized visual record that arose from western technology was, to an indigenous man, nothing more than a soul-less chullachaqui.